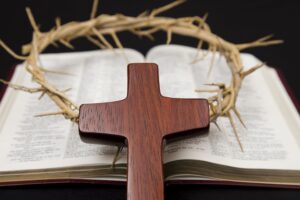 All of us who follow Christ are called to the task of Evangelism but many Christians see this as a scary prospect. What if I get into a discussion that I can not answer? What if they get angry with me? What if I end up looking stupid? Evangelism is not arguing. Jesus never argued with anybody. He simply sowed ‘seeds’ to make people think. It is the Holy Spirit which waters the seed.

People who resist the gospel almost always use one of five generic excuses. Here’s how you can respond.

1. Don’t all religions teach basically the same things but just use different names for God?

All world religions are significantly different. One major difference is the contradictory view of the Nature of God.

For example, some forms of Buddhism do not teach about God at all. Hinduism teaches that multiple gods exist and that even rocks, trees, and animals are part of these gods. Christianity teaches that God exists but that He is separate from all creation. Most religions see Jesus as a Prophet of God but not who He claimed to be – the incarnation of God Himself.

The Bible describes Jesus in an unprecedented fashion found in no other religious text – as “the Word became flesh” John 1:14. Christianity also teaches that Jesus died on a Cross to pay the price for ‘Man’s’ sins and that He was resurrected from the dead. Most other religions even deny that sin exists or that it separates man from God.

2. Isn’t it narrow-minded for Christians to think they’re the only ones who are right?”

Advocates of Political correctness are always saying that Christians are ‘narrow-minded’. Modern pluralists say that they would like a ‘tolerant’ society that embraces all religions and lifestyles. They want a world where anything goes. Yet Jesus never talked about tolerance but rather commanded His followers to demonstrate a far higher objective – to show love to all people! Though it is possible to tolerate someone without loving them, the reverse is impossible.

Jesus was intolerant of sin and mankind’s fallen nature – He did something about it. He reversed the curse over people’s lives. The issue is not with us – what we can do to change things it is what He did for us that enables us to have a personal relationship with God in heaven. Jesus said “I am the way, the truth, and the life. No one comes to the Father except through me” John 14:6

3. I don’t believe the Bible. It is a book of myths and legends put together by pre-scientific men marked by superstitions and fears.

Jesus said, “Unless a man is born-again, He cannot see or enter the kingdom of heaven”. John 3:3 To fully understand the Bible and it’s the central message of salvation, one must be born-again. That’s why many people who attempt to read the Bible who are not saved cannot comprehend it’s truths.

The Bible stands head and shoulders above any work of antiquity for both trustworthiness and bibliography accuracy. The New Testament offers up to 24,000 surviving manuscript copies and a shorter time span between copies (50 years) than any other Bibliographical work in the world.

Norman L. Geiser and William E. Nix comment in ‘A General Introduction to the Bible’ “For all practical purposes the modern critical editions of the Hebrew and Greek texts of the Bible represent, with their footnotes, exactly what the autographs (original documents) contained – line for line, word for word and even letter for letter”.

Because it is a divinely inspired book with only One Author (Holy Spirit). It speaks beyond the intellect to the depths of the heart, empowering us to make positive inner-choices, repentance and faith that produce a beneficial lifestyle. “Above all you must understand that no prophecy of Scripture came about by the prophet’s own interpretation. For Prophecy never had its origin in the will of man, but men spoke from God as they were carried along by the Holy Spirit” 2 Peter 1:20-21 NIV

4. If a loving and all-powerful God really exists, why doesn’t He do something about the evil in the world?

This is a difficult question. We must come to the realization that evil is not just some vague force that hovers around somewhere instead it is personal and lives within each of us. If God wanted to get rid of evil, He would have to get rid of all of us as well.

This “evil” is a result of Adam’s Fall in the Garden of Eden. The Bible calls it “sin-nature” which can only be atoned for by the Blood of Jesus Christ.

God created man with a free will because He loves us. We all have the freedom to choose right from wrong, good from evil. Without free will, there could be no love.

With free will comes the consequences for the things we choose. We live in a culture that cries out for freedom of choice but hates the responsibility that comes with it. In the USA there have been multiple law-suits made against giant fast food outlets from people who freely chose to frequently eat there and got fat, now they are suing for being unhealthy.

If God were to limit the consequences of evil, our free will would disappear and moral consequences would become a mere game.

The Bible does tell us that God is both “just” and “merciful”. In His mercy, He is patiently giving us time to turn to Him and receive forgiveness and the life He offers. He also promises to put an end to all evil and one day will execute final judgment.

Consider that without God there would be no standard for what is “good” or “evil”. The concepts of good and evil are moral values or judgments that denote the existence of a moral Governor (God). Without God, we would have come into existence by chance and whatever we do would have no meaning or moral value, positive or negative. Many believe this to be true but their response to injustice, unfair situations, or wrongs in life are an injustice that has occurred towards them. This approach betrays their very belief system fall without the existence of God you cannot have a moral standard that can be violated.

5. I don’t believe in God. What kind of proof can you offer me that He exists?

Science points to the highly complex order in the universe. The human body is a complex yet ordered creature. Elementary logic tells us that any type of ordered design requires a designer.

Next comes, “Than who made God?”. The Bible says that God is the uncaused cause of all things. He has always existed. Creation proves His existence therefore requiring God no necessity to justify Himself. The entire Universe is overwhelming proof of the existence of God. Failure to believe is a failure to believe the most overly proven, monumental amount of visible evidence that is in us, around us and confronts us everyday moment of our lives yet when a person is in the dark it’s impossible to see your own hand an inch away from your face. When you are “born-again” the light goes on.

Evidence is also found in Jesus Christ. Written History by Jewish, Greek, and Roman historians testify to the miraculous events of the life of Jesus Christ. It is an undisputed fact amongst scholars of Ancient History that significant events took place during the time of Jesus Christ whilst on earth.

Proof can also be found in the Jewish People. Their existence is found in the Bible. Places which the Bible describes are in existence today. Proof can be found in changed lives. This is exactly what the Bible say’s will happen when one place their faith in Jesus Christ. The ultimate fulfillment I sought was finally realized when I accepted Jesus Christ. His forgiveness and love have completely altered the course of my life. His peace and joy are now a daily reality. This reality is here today for you to experience.

Common reasons why people say they will never become a Christian can be easily answered. Ultimately, it takes more faith to believe that there is nothing then to acknowledge the existence of God.