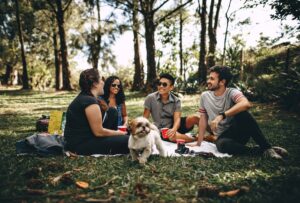 MARK 7:25-28 “For a woman whose young daughter had an unclean spirit heard about Him, and she came and fell at His feet. The woman was a Greek, a Syro-Phoenician by birth, and she kept asking Him to cast the demon out of her daughter. But Jesus said to her, “Let the children be filled first, for it is not good to take the children’s bread and throw it to the little dogs.” And she answered and said to Him, “Yes, Lord, yet even the little dogs under the table eat from the children’s crumbs.”

Syro-Phoenician by birth and raised in a Greek family. Their religion was most likely pagan worship of false gods, idols, and the occult perhaps what we would call the New Age Movement today including astrology, clairvoyants. The little girl most likely was dedicated at a pagan ceremony.

These practices are forbidden in the Bible because they bring a curse over your life and your children.

When you enter the land that God, your God, is giving you, don’t take on the abominable ways of life of the nations there. Don’t you dare sacrifice your son or daughter in the fire. Don’t practice divination, sorcery, fortunetelling, witchery, casting spells, holding séances, or channeling with the dead. People who do these things are an abomination to God. It’s because of just such abominable practices that God, your God, is driving these nations out before you. 13-14 Be completely loyal to God, your God. These nations that you’re about to run out of the country consort with sorcerers and witches. But not you. God, your God, forbids it.

ACTS 10:38 “How God anointed Jesus of Nazareth with the Holy Spirit and with power, who went about doing good and healing all who were oppressed by the devil, for God was with Him.”

When the woman asked for her daughter to be healed Jesus replied by saying that it was not good to give the ‘children’s bread’. What does ‘bread’ or ‘crumbs’ refer to? It refers to the HEALING she was asking for. The ‘bread’ was really himself that brings salvation, healing, and wholeness.

On the night of the PASSOVER, I believe the disciples understood what Jesus meant when He said…

MATTHEW 26:26-27 26 “And as they were eating, Jesus took bread, blessed and broke it, and gave it to the disciples and said, “Take, eat; this is My body.” 27 Then He took the cup, and gave thanks, and gave it to them, saying, “Drink from it, all of you. 28 For this is My blood of the new covenant, which is shed for many for the remission of sins.”

The disciples knew that Jesus wanted to impart into their lives health, strength, and wholeness. In fact, the BODY of JESUS was so anointed that even His clothing pulsated with power with people only having to touch the hem of His garment.

LUKE 6:19 “And the whole multitude sought to touch Him, for power went out from Him and healed them all.”

Partaking of COMMUNION today is partaking of the very health, wholeness, and salvation of Jesus Christ – DO YOU DISCERN THIS TRUTH?

The power of COMMUNION is released in discerning this truth.