DELIVERANCE ACCORDING TO THE HOLY BIBLE 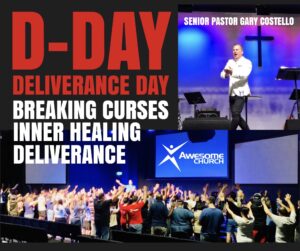 MATTHEW 8:16-17 NKJ “When evening had come, they brought to Him many who were demon-possessed. And He cast out the spirits with a word and healed all who were sick,
that it might be fulfilled which was spoken by Isaiah the prophet, saying: ‘He Himself took our infirmities and bore our sicknesses.”

MATTHEW 8:16 NLT “That evening many demon-possessed people were brought to Jesus. He cast out the evil spirits with a simple command and he healed all the sick.”

MATTHEW 8:16-17 LIVING BIBLE “That evening several demon-possessed people were brought to Jesus and when he spoke a single word all the demons fled and all the sick were healed. This fulfilled the prophecy of Isaiah ‘He took our sicknesses and bore our diseases.’”

MATTHEW 8:16 TPT “That evening the people brought to him many who were demonised. And by Jesus only speaking a word of healing over them they were totally set free from their torment and everyone who was sick received their healing!”

The Holy Spirit has shown me that with just a WORD the demonised today will be delivered and the sick will be healed.

In the Old Testament God delivered His people out of the bondage and slavery of Pharaoh in Egypt to the freedom of God’s Promised Land in Canaan. This was a physical DELIVERANCE which was led by Moses the deliverer.

God’s people were set free from bondage and freed from slavery.
In the New Testament God uniquely delivered His people out of the bondage of Satan to the freedom of a New Creation. This was a spiritual DELIVERANCE which was led by Jesus Christ.

Pharaoh in the Old Testament was a type and shadow of Satan in the New Testament both causing God’s people to be bound.

As we will see the DELIVERANCE is from spiritual bondage as it affects people physically through oppression, depression, sickness, mental torment, and addictions.

This teaching is to show you DELIVERANCE ACCORDING TO THE HOLY BIBLE specifically FREEDOM IN CHRIST as found in the New Testament.

I will preach and teach and give people an opportunity to respond by faith to be saved, healed, and delivered. I will do this with a simple Word that the Holy Spirit has given me for your deliverance.

The Bible is clear about the reality of spiritual warfare.

EPHESIANS 6:12 LIVING BIBLE “For we are not fighting against people made of flesh and blood but against persons without bodies the evil rulers of the unseen world, those mighty satanic beings and great evil princes of darkness who rule this world and against huge numbers of wicked spirits in the spirit world.”

1 PETER 5:8 NKJ “Be sober, be vigilant because your adversary the devil walks about like a roaring lion, seeking whom he may devour.”

We are not given much information in the Bible of the origin of demons only that they exist, Jesus confronted them, rebuked them, and commanded that His Church cast them out of people.

EXTERNAL demonisation can be resisted personally.
INTERNAL DEMONISATION must be cast out by another person.

Demons are evil spirits which the Bible says come to torment people with three main objectives.
1. To keep you in sin and bound by a curse.
2. To keep you away from knowing Jesus Christ.
3. To keep you distracted from serving the Lord and His Church.
I want to stress that only through faith in the Cross of Jesus Christ can a person be DELIVERED from SIN, CURSES and DEMONISATION.

DEPRESSION accompanied by mental and or emotional turmoil. This depression as with all the other evidences can also be generational that is affecting not only the individual but a parent, grandparent, sister, auntie etc in others. It’s seen in many members of the same family tree.

POVERTY that once again is rampant within the household and previous generations. An on-going insufficiency financially. Constant lack and no ownership of any property.

SICKNESS disease and infirmity which is unexplained and is usually always terminal. Something is in the bloodstream or DNA causes the same symptoms and illness to reoccur in the family tree. Science calls it hereditary the Bible calls it a generational curse.

ADDICTIONS which are always driven by a spirit of death to prematurely cut short the person’s life such as alcoholism, drug-taking, immorality, adultery, and divorce. It can also be evident in the family with multiple members struggling with addictions.

2. OPEN DOORS THAT LEAD TO DEMONISATION.

SIN is the OPEN DOOR for demonisation and is directly connected to Satan’s kingdom. Deal with the sin through repentance and Satan’s grip over your life is diminished.

1 JOHN 3:8 NKJ “He who sins is of the devil for the devil has sinned from the beginning. For this purpose the Son of God was manifested that He might destroy the works of the devil.”

I want to add to that EPHESIANS 4:27 AMPLIFIED BIBLE “And do not give the devil an opportunity to lead you into sin by holding a grudge or nurturing anger or harbouring resentment or cultivating bitterness.”

Any UNFORGIVENESS which you keep in your heart will give Satan legal found to demonise you. It is essential that you FORGIVE and allow yourself to be purged from any bitterness.

HEBREWS 12:15 NKJ “Looking carefully lest anyone fall short of the grace of God; lest any root of bitterness springing up cause trouble, and by this many become defiled.”

These open doors to sin have consequences which the Bible calls CURSES. Curses are invisible powers of evil that come to restrict, bind, and hinder any blessing of God from manifesting in your life.

Many people have described a curse as being constricted in life with nothing ever going right for them. The curse may have been present since childhood or after a certain involvement with a person or activity, things begin to go wrong.

Curses are usually accompanied with depression, confusion and constant resistance to ever being able to move forward in life. It just feels like invisible chains holding you back from the increase.

Curses are the consequences of disobedience to God’s Word. There are many sources of curses including God, disobedience, lawless living, negative words, a work of witchcraft and idolatry.

PROVERBS 26:2 NKJV “Like a flitting sparrow, like a flying swallow, So a curse without cause shall not alight.”

The Bible clearly outlines the curses that afflict people as a consequence to disobedience in the Book of Deuteronomy 28.

Here is a list of the 7 indications of a curse.
1. Mental and/or emotional breakdown.
2. Repeated or chronic sicknesses.
3. Barrenness a tendency to miscarry or related female problems.
4. Breakdown of marriage and family alienation.
5. Continual financial insufficiency.
6. Being accident-prone.
7. A history of suicides and unnatural or untimely deaths.
Curses must be repented, renounced and rescinded in the name of Jesus Christ before a person can be released from any curse. They just don’t go away on their own and the worst thing a person can do is to consult witchcraft or some other new age practitioner to have the curse removed…listen satan can not cast out satan only the Blood of Jesus Christ shed on Calvary’s Cross has the power to dissolve any curse.

LUKE 11:20 NKJ “But if I cast out demons with the finger of God surely the kingdom of God has come upon you.”

Deliverance is God’s Kingdom overthrowing Satan’s Kingdom in your life but first you have to make a choice which Kingdom you want to abide in. God’s or Satan’s.

1 THESSALONIANS 5:23 NKJ “Now may the God of peace Himself sanctify you completely and may your whole spirit, soul and body be preserved blameless at the coming of our Lord Jesus Christ.”

When a person is BORN AGAIN their SPIRIT is filled with the Holy Spirit and can not be possessed by an evil spirit but a person’s SOUL (Mind, Will & Emotion), and BODY can be.

The Bible says in MARK 6:7 NKJ “And He called the twelve to Himself and began to send them out two by two and gave them power over unclean spirits.”

MARK 6:12-13 NKJ “So they went out and preached that people should repent. 13 And they cast out many demons and anointed with oil many who were sick, and healed them.”

LUKE 10:1 NKJ “After these things the Lord appointed seventy others also.”
LUKE 10:17 NKJ “Then the seventy returned with joy, saying ‘Lord even the demons are subject to us in Your name.’”

MARK 16:16-18 NKJ “He who believes and is baptised will be saved but he who does not believe will be condemned. And these signs will follow those who believe: In My name, they will cast out demons they will speak with new tongues they will take up serpents and if they drink anything deadly it will by no means hurt them they will lay hands on the sick and they will recover.”

SALVATION Lord Jesus Christ I believe that you are the Son of God. I repent of all of my sins. I renounce all lawlessness and rebellious living. Lord Jesus Christ come into my life. I want to be saved in Jesus’ name.

HEALING Lord Jesus Christ I believe that your Body was broken on the Cross for my sicknesses and by faith, I accept your healing power in my life today for by your stripes I am healed in Jesus’ name.

DELIVERANCE Lord Jesus Christ I believe that your Blood was shed on the Cross for my demonisation and by faith, I accept your delivering power in my life for the Blood of Jesus Christ cleanses us from all sin.